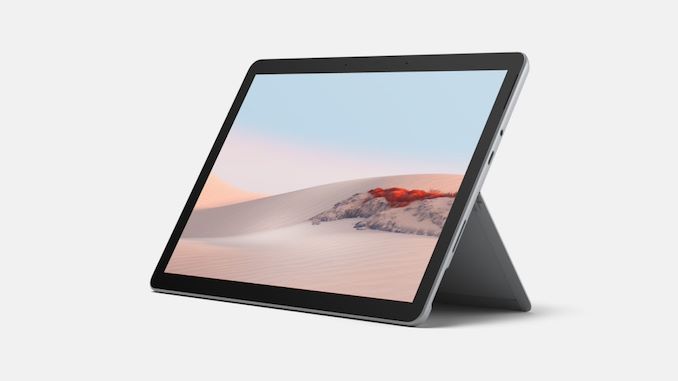 The smallest member of the Surface family is getting some nice updates. Microsoft has shrunk the bezels slightly and were able to fit in a 10.5-inch display in the same size device as the original generation. The new 10.5-inch PixelSense display also gets a slight resolution bump to compensate, coming in at 1920×1280, keeping the 3:2 aspect ratio Surface is known for, and achieving 220 pixels per inch.


One of the biggest knocks against the first generation was its lackluster performance, and Microsoft is now offering two new processor options. The first generation shipped with an Intel Pentium 4415Y, based on the Amber Lake platform. On the base model, there is a slight boost, since it will now move to the Intel Pentium 4425Y, boosting the frequency from 1.6 GHz to 1.7 GHz. For those that want a bit more speed, Microsoft is also offering a model with the Intel m3-8100Y, also based on Amber Lake, but the key difference being that the Core lineup offers Turbo, and the Pentium lineup does not. The Core m3-8100Y boosts to 3.4 GHz at its default TDP of 5 Watts, and should make a substantial difference for light workloads.

Otherwise the hardware has not changed much. Microsoft has added dual-studio microphones, which pair well with the 5 MP front camera for video conferencing, which has become much more important in today’s climate. They’ve also added a new camera application for the rear 8 MP camera to make it easy to scan documents and whiteboards. One has to assume the app is based on their Office Lens software, which works very well for these tasks. The base unit still features 64 GB of eMMC storage, and you can opt for a 128 GB SSD model as well. It would have been nice to see both of those values doubled for this year, even if it meant the devices cost slightly higher.

The 10.5-inch convertible tablet of course works with the Surface Pen as well, and Microsoft has new colors for the Type Cover accessory for this season, with Platinum, Black, Poppy Red, and Ice Blue options this year.

The original Surface Go was a well-built machine, and the new version starts at the same base price of $399. Prices will go up from there, and Microsoft is continuing to offer the LTE version as well. 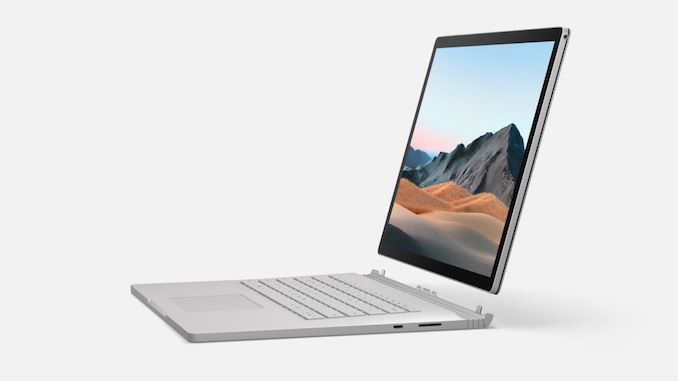 The big changes this year are all under the hood. The Surface Book lineup now features Intel’s Ice Lake processors, with the Core i5-1035G7 as the base option on the smaller 13.5-inch model, and the Core i7-1065G7 as an option on the 13.5, and standard on the 15-inch Surface Book 3. RAM options now allow for up to 32 GB, thanks to Ice Lake’s use of LPDDR4X. Microsoft has paired the new processors with new GPUs as well. The smaller device bumps the GPU from the NVIDIA GTX 1050 in the previous gen to a NVIDIA GTX 1650 Max-Q with 4 GB of GDDR5 for 2020. The larger Surface Book 3 gets a new NVIDIA GeForce GTX 1660 Ti Max-Q. For those that need Quadro, Microsoft is also offering the Quadro RTX 3000, which is actually a pretty big jump in GPU size compared to the GTX 1660Ti, going from 1536 CUDA cores up to 2304 on the RTX Quadro 3000. There may be some questions as to why Microsoft opted for a GTX 1660 Ti when the RTX 2060 Max-Q is available, but the RTX model is quite a bit more power hungry in most scenarios.

For 2020, Microsoft has also re-engineered their Surface Connect adapter, and the new Surface Book 3 should no longer drain the battery under high-load scenarios. The new model ships with a 127-Watt charger on the 15-inch model, and a 102-Watt charger on the GPU-equipped 13.5-inch version. The maximum power the original Surface Connect could handle was 100 Watts, so this small amount of extra capacity should do the trick.

Microsoft still is not interested in Thunderbolt 3, but the Surface Book 3 features the same USB-C 3.2 Gen 2 port as the previous model, including USB Power Delivery revision 3.0. The new Surface Book 3 will be available May 21 starting at $1599.

Maybe headphones are not your thing. Microsoft is now offering Surface Earbuds, featuring touch-controls for dialing and changing songs. They can auto-start Spotify by triple-tapping either earbud. They come with a wireless charging case, and offer “all-day” battery life. The Surface Earbuds will be available May 12 for $199.

Microsoft has updated their Surface Dock with faster charging, higher data rates, and enterprise management, which was a feature that was likely very highly requested by Microsoft’s enterprise customers. They will also be offering a new USB-C Travel Hub to connect to multiple devices when you are on the go.