Shiny On Top, Solid Underneath

Ever since it was founded back in 2004, NZXT has been focused on the always-lucrative PC gaming market. The company started out with just a few PC cases, yet their unique aesthetics and features were more than enough to let the company establish a solid foothold in the advanced PC market. Several years later, NZXT slowly began diversifying their product portfolio by adding cooling and power products to it. Today, the company produces a large variety of PC cases, cooling, and power products, as well as PC peripherals and accessories.

NZXT entered the PC cooling market nearly a decade ago by releasing all-in-one (AIO) liquid cooling solutions and accessories for them, including GPU mounting brackets. However unlike other manufacturers who have opted to build large, diverse product lineups, NZXT never kept more than a handful of AIO coolers available in their product line-up. Instead, the company has focused on delivering a few quality and aesthetically-unique designs, rather than trying to take the competition down on raw performance alone.

Today we are taking a look at NZXT’s latest liquid coolers, the Kraken X-3 and Z-3 series. These are more of a refresh rather a total upgrade over last year’s X-2 series, but NZXT has made some notable tweaks. Between the two families there are five different coolers in three sizes, covering the usual 240/280/360mm configurations. Both the X and Z series utilize the same cooling hardware, but NZXT has positioned the Z series as a premium option with a novel aesthetic feature – while the X series has RGB lighting on top of the pump base, the Z series tops its base with a full-fledged (and full color) LCD screen.

For this review we’re checking out both the X73 and the Z63, giving us a full view of the performance and features we can expect from most coolers that NZXT currently offers.

The new Kraken Z-3 and X-3 coolers ship in relatively simple packaging, based on the same white/purple artistic theme that NZXT has used over the last few years. A picture of the cooler covers the otherwise plain front of the packaging. Inside the box we found the coolers and their parts well protected by custom cardboard inserts. 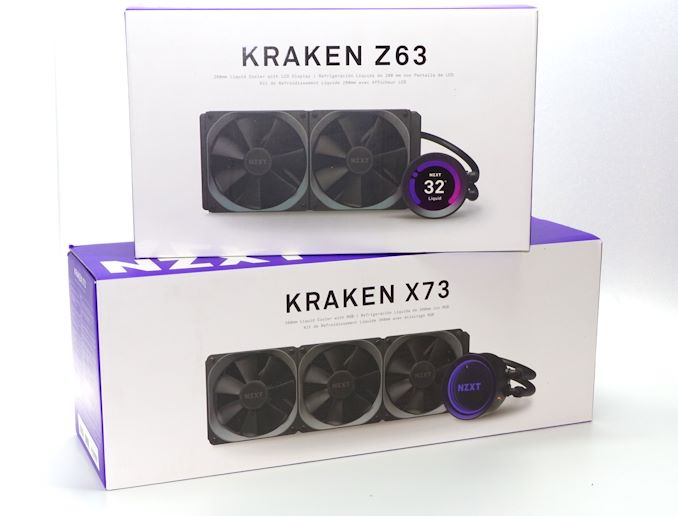 All of the coolers share practically the same bundle, which is limited to the basics. Inside the box we only found the required mounting hardware, the necessary wiring, and an installation manual. We should also note that NZXT does not include the TR4 socket mounting plate by default, but they do have one available as an optional part for Threadripper owners. 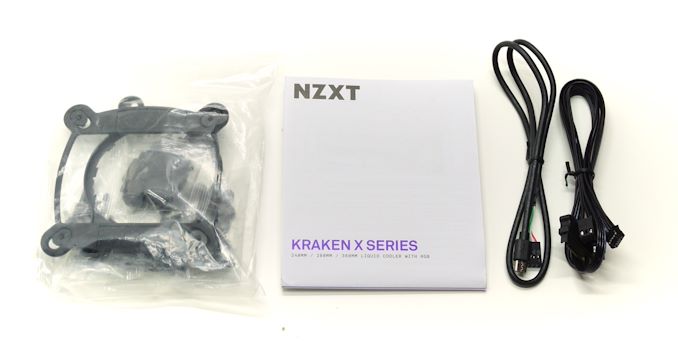 The NZXT Z63 and X73 come with two 140 mm and three 120 mm fans respectively. The company went with high quality fans, with fluid dynamic bearing (FDB) engines and anti-vibration mounting pads. They are not overly powerful, though with their flat-bladed, high-pressure design they shouldn’t have much trouble overcoming the resistance of the radiator. There is no lighting about the fans, with the company focusing their artistic enhancement efforts on the pump block instead.

Digging into our review samples, let’s start with deciphering NZXT’s cooler names. The first character denotes the series, the second the size, and the third is the version. For example, the Z63 and the Z73 coolers belong to the same series and share most features but their radiator size differs, while the X73 and Z73 are of the same size but belong to different series. Thus the Z63 and the X73 that we will be reviewing today check both of these boxes, allowing us to explore the differences between the Z and X series and measure the thermal performance of both the 280 mm and the 360 mm coolers.

So what sets apart NZXT’s X and Z series coolers? In short, it’s all about displays. For the Z series, NZXT has topped off the the main block assembly with a 2.36” LCD screen. The LCD can be programmed to showcase everything from images and GIFs to real-time data. And despite the low 320×320 px resolution, it is crisp and bright, with beautiful color reproduction.

Otherwise for the X model, NZXT dials things back just a tad and uses a mirrored top with LEDs placed under it. Once powered, the company logo and a ring appear, with the mirror creating an infinity effect about the ring. The LEDs are RGB and users can adjust the colors of the ring using NZXT’s CAM software. On the whole it is a relatively simple and attractive visual setup.

Other than the display topping the main block, the X and Z series coolers are all but identical. The rest of the main block is the same between the two, going right down to the contact plate and mini pumps. So at the base of NZXT’s LCD and LED handiwork lies a circular copper plate, secured on the plastic body with eight stainless steel screws. A layer of thermal paste is pre-applied onto the contact plate. It is not machined down to a mirror finish but it is smooth and entirely flat. The contact plate is not large enough to cover Ryzen Threadripper processors and, although it should work okay, we generally advise against using coolers that are not specifically developed for the TR4 socket on Threadripper processors.

Moving on, let’s talk about NZXT’s radiators. Their different sizes aside, the radiators of both the Z63 and X73 seem to be identical in terms of design. The subtle but significant difference is that the 120 mm fan radiator of the X73/Z73 is 26 mm thick, while the 140 mm fan radiator of the Z63/X63 is 30 mm thick. It’s just a few millimeters, but it’s something that should absolutely be considered confirming the cooler’s compatibility with a given case, as sometimes a few millimeters makes all the difference. Both radiators are typical dual-pass cross-flow designs, with tiny fins soldered on thin oblong tubes. This is by far the most dominant radiator design for AIO systems and rightfully so, as it offers the best efficiency within limited proportions and for the temperature differences that AIO coolers have to deal with.

The hose fixings on the radiator side are immovable, making them a bit less flexible during installation. In order to cope with long-term evaporation losses, NZXT is using what they are calling “ultra-low evaporation” high-density rubber tubing, with external nylon sleeve braiding for additional mechanical protection. NZXT also took the time to punch the company logo on the sides of the radiators.