As part of its Architecture Day 2020, Intel discussed its cutting edge Xe GPU architectures. We have seen Intel present information about Xe GPUs before but today was billed as “the first look” at its fully scalable Xe graphics architectures.So, we know it is scalable, through integrated graphics to exascale data centres but Intel had one surprise up its sleeve, a new variant called the Xe-HPG. Intel promises to ship the GDDR6 packing raytracing supporting Xe-HPG add-in-cards for PCs in 2021.

Before pulling the Xe-HPG out of the bag, Raja Koduri, Intel SVP, Chief Architect, GM, Intel Architecture, Graphics, and Software provided a recap on the Xe architecture. Starting at te lower end of things Intel talked about the Xe-LP (low power) microarchitecture and software optimized to deliver efficient performance for mobile platforms. Xe-LP will sport up to 96 EUs but features a rich set of features such as; asynchronous compute, view instancing, sampler feedback, updated media engine with AV1, and an updated display engine. The product should appeal to those gaming and streaming games on compact modern portables.

The code-name DG1 is in production, is on track for shipping in 2020, and it is the first Xe discrete GPU based on the Xe-LP GPU. Xe-LP is also going to be featured in SoCs like Tiger Lake, so covers integrated graphics too. 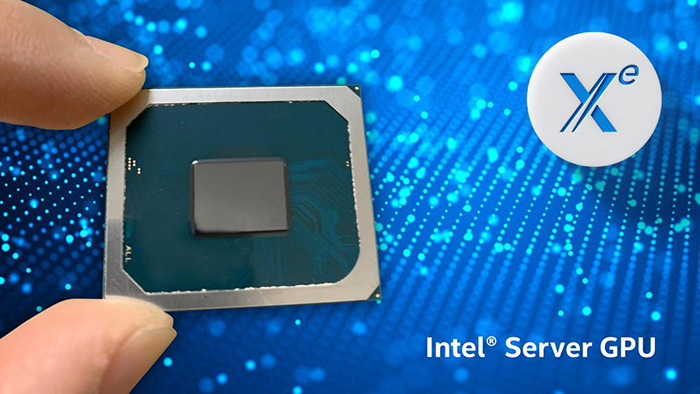 At the other end of the scale you will have products based upon the Xe-HP in the data centre, and the Xe-HPC in exascale data centres. Koduri said the first Xe-HP chip is sampling to customers in data centres. These GPUs feature petaflop-scale AI performance and rack-level media performance in a single package based on Intel EMIB technology. Xe-HP will leverage enhanced SuperFin technology too. You can see that Intel provides this solution in various ‘Tile’ configurations, below.

The Goldilocks Intel Xe GPU for HEXUS readers will mostly be the newly announced Xe-HPG. This fourth Xe microarchitecture is “optimised for gaming”, features raytracing support, and a new GDDR6 memory subsystem for appealing performance/dollar.

Koduri says that Xe-HPG combines the performance/watt building blocks from Xe-LP, with the scale from Xe-HP, and compute frequency optimisation of Xe-HPC. However, the acid test for this range of discrete graphics cards will be how it fares in this hotly contested market against the AMD and Nvidia incumbents. Of course, the red and green team tech marches on too, with big developments from both camps expected soon, while Xe-HPG isn’t due until sometime next year.

Intel continues to tune its graphics software and a couple of important new features have been added to the Intel Graphics Command Center (IGCC) including instant game tuning and game sharpening. The former is the addition of game-specific driver patches that can be pushed to users quicker than a full driver software update. Meanwhile, game sharpening employs a compute shader-based adaptive sharpening algorithm that boosts image clarity in games. This sharpening combines well with titles that use resolution scaling, says Intel.

Check our other posts: